Title: The Aftermath of Christchurch: Voices and Consequences

March 26th, 2019 – A Panel of experts, (Dr. Saleem H. Ali, Dr. Alan Tidwell, and Dr. Claire Higgins), came together to discuss the reaction and perspective on what lead up to and what followed the Mosque shooting incident in ChristChurch New Zealand in March of 2019.

Panelists
Dr. Saleem H. Ali is an environmental planner whose research and practice focus on ways of resolving ecological conflicts through technical and social mechanisms, as well as exploring novel ways of peace-building between corporations, governments and communities. He holds the Blue and Gold Distinguished Professorship in Energy and the Environment at the University of Delaware, USA (commencing September 2016). He is also a Senior Fellow at Columbia University’s Centre on Sustainable Investment. Professor Ali has also held the Chair in Sustainable Resources Development at the University of Queensland’s Sustainable Minerals Institute in Brisbane, Australia (where he retains professorial affiliation). He has previously been a professor of environmental studies at the University of Vermont’s Rubenstein School of Natural Resources where he was founding director of the Institute for Environmental Diplomacy and Security. His books include Treasures of the Earth: Need, Greed and a Sustainable Future (Yale Univ. Press), Environmental Diplomacy (with Lawrence Susskind, Oxford Univ. Press), Mining, the Environment and Indigenous Development Conflicts (Univ. of Arizona Press), and Islam and Education: Conflict and Conformity in Pakistan’s Madrassas (Oxford Univ. Press). He has also authored over a hundred other peer-reviewed publications and been the editor of acclaimed anthologies including Peace Parks: Conservation and Conflict Resolution (MIT Press) and Diplomacy on Ice: Energy and the Environment in the Arctic and Antarctic (with R. Pincus, Yale Univ. Press).

Dr. Alan Tidwell is Director of the Center for Australian, New Zealand and Pacific Studies at the Edmund A. Walsh School of Foreign Service, Georgetown University. Prior to joining Georgetown University, he was a program officer with the United States Institute of Peace, where he specialized in conflict resolution and capacity building in Southeast Asia. His work focused particularly on the peace processes in Mindanao and Aceh. Tidwell collaborated with scholars from these conflict-affected regions to develop conflict resolution curriculum programs. In 1992 Tidwell, a Washington D.C. native, moved to Sydney, Australia where he was a lecturer in the Centre for Conflict Resolution at Macquarie University. Later, he moved to Sydney University where he became the research director of the Australian Centre for American Studies. At Sydney University Tidwell focused on enhancing the Australian American relationship through research and public education. He returned to Macquarie University as a senior lecturer at the Graduate School of Management, specializing in conflict resolution and negotiation. He holds a PhD in international relations from the University of Kent, a Masters in professional ethics from the University of New South Wales, and a Masters degree in conflict management from George Mason University.

Dr. Claire Higgins is a Senior Research Associate at the Kaldor Centre for International Refugee Law at UNSW Sydney. She is the author of Asylum by Boat: origins of Australia’s refugee policy (NewSouth, 2017), and holds a doctorate in History from the University of Oxford. Claire was a Fulbright Scholar at Georgetown University in 2018, and a Visiting Scholar at the European University Institute in 2017. 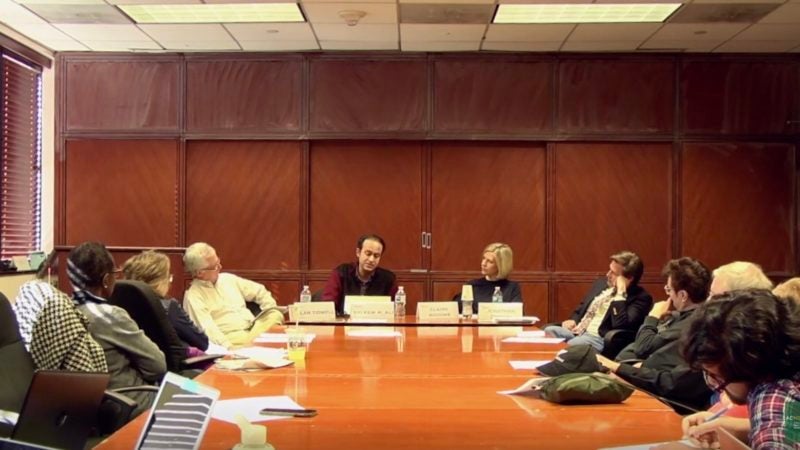