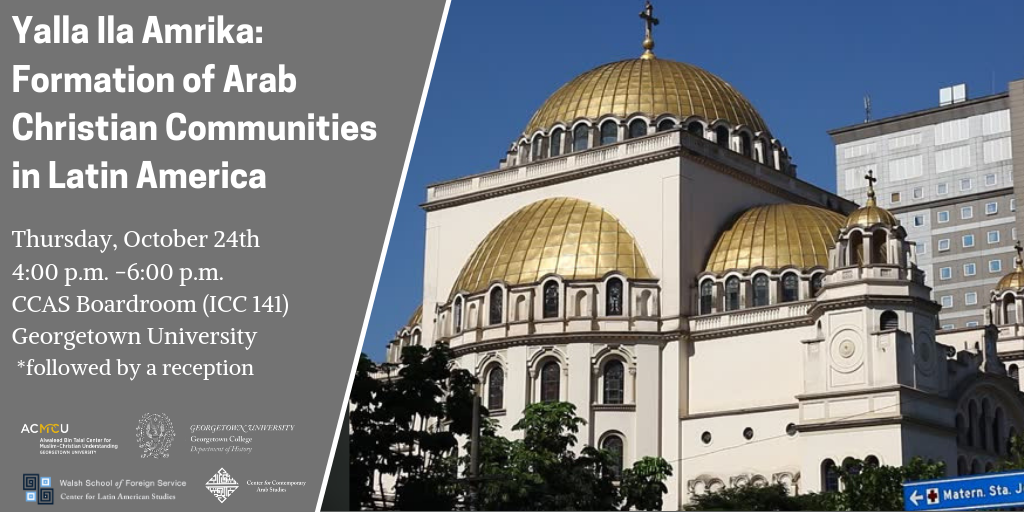 This event is co-sponsored by the Center for Latin American Studies, the Department of History, and the Catholic Studies Program at Georgetown University.

*Followed by a reception

Emigration from Lebanon, Palestine, and Syria that began during the last decade of the 19th century has created significant and influential Arab Christian diasporas in Latin America. This panel will bring together prominent scholars who will discuss both the historical contexts of Arab Christian immigration to Argentina, Brazil, Chile, and Mexico, and recent developments in Arab communities in the region.

Dr. Steven Hyland is Associate Professor in the Department of History and Political Science at Wingate University and author of More Argentine Than You: Arabic-Speaking Immigrants in Argentina (University of New Mexico Press, 2017). A historian specializing in Argentina, international migration, and transnational social and political movements, his current research examines the interplay between itinerant radical activists, civil society, the Argentine state, and such foreign state actors as diplomats and spies in Buenos Aires between 1916 and 1966. He was recently a Fulbright Scholar in Argentina and taught at the Universidad Nacional de La Plata.

Dr. John Tofik Karam is Associate Professor in the Department of Spanish and Portuguese and Associate Director of the Lemann Institute for Brazilian Studies at the University of Illinois, Urbana-Champaign. His first book Another Arabesque (Temple University Press, 2007) won awards from the Arab American National Museum and the Brazilian Studies Association. With María del Mar Logroño Narbona and Paulo G. Pinto, he co-edited Crescent Over Another Horizon: Islam in Latin America, the Caribbean, and Latino USA (University of Texas Press, 2016). Supported by the NEH and Fulbright programs, his current book project is titled Manifold Destiny: Arabs at an American Crossroads of Exceptional Rule.

Dr. Camila Pastor De Maria y Campos is a professor in the History Division of Centro de Investigación y Docencia Económicas (CIDE) in Mexico City. Her research in historical anthropology focuses on transnationalism, mediation, gender, and hierarchy in Middle Eastern and Latin American colonial and postcolonial settings. She is the author of The Mexican Mahjar: Transnational Maronites, Jews and Arabs under the French Mandate (University of Texas Press, 2017) which was awarded the 2018 Khayrallah Migration Studies Prize, and is Associate Editor for the Oxford Encyclopedia of Islam in North America. She recently concluded an ethnographic census of the Muslim population of Mexico and is working on a new book project on performance, prostitution, and other spheres of suspect labor in the Mandate Mediterranean.

Nicholas Bascuñan-Wiley is a PhD student in Sociology and a Mellon Cluster Fellow in Middle East and North African Studies at Northwestern University. His ethnographic research explores Palestinian diasporic culture and trans-local connections within Latin America. His most recent project focuses on the culture of food and eating as it is shaped by the long-term and long-distance connections between communities in Chile and Palestine.