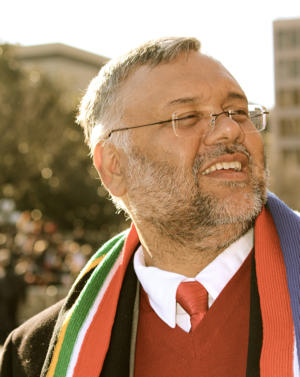 Ambassador Ebrahim Rasool is a former Distinguished Scholar in Residence at Georgetown University’s Edmund A. Walsh School for Foreign Service. He worked in the Alwaleed Bin Talal Center for Muslim-Christian Understanding, advancing an alternative paradigm to the inertia of Orthodoxies in the face of Extremisms. He is the founder of the World for All Foundation that endeavors to create a world of coexistence and that is safe for difference.

Ambassador Rasool has recently completed a term of duty as South Africa’s Ambassador to the United States of America, an appointment that was the culmination of a distinguished record of Public Service in South Africa. Previously he served as a Member of Parliament in South Africa’s National Assembly, Special Advisor to the State President and has built up extensive experience in various Departments like Health, Welfare, Finance and Economic Development in the capacity of Provincial Minister.

Ambassador Rasool has been the recipient of a number of awards: “Social Services Leader of the Year” Award (1995), from the African Investment Group; “Visionary Leadership and Public Good” Award from the World Congress of Muslim Philanthropists (2008); “Commitment and Leadership in the Fight Against Crime” from Business Against Crime (2009); The 2005 London Financial Times “Foreign Direct Investment (Africa), Personality of the Year” Award; The “Nelson Mandela Award for Health and Human Rights” presented to him by the Kaiser Family Foundation in 1998; and “Indonesian Diasporean of 2012” Award by the President of Indonesia. During his term as Ambassador he also received the Award for his Lifetime Commitment to Human Rights by Shared Interest in New York, and Inaugural Presidential Lifetime Achievement Award from the National Press Club in Washington, DC.

Founder of the World for All Foundation, Ambassador Rasool is active in rethinking the intellectual tools for co-operative relations between faiths, cultures and communities at a global level, and establishing dignity, inclusion and equity for those marginalized and excluded. The World for All is especially active among Muslim Minority communities, transferring examples of co-existence from South Africa, and increasingly is acting as a conduit for Nelson Mandela’s lessons to the Muslim heartlands in need of freedom, democracy and human rights.

Ebrahim Rasool studied at the University of Cape Town where he received a Bachelor of Arts Degree in English Literature and Economic History, and a Higher Diploma in Education. He has an incomplete Honors in Literary Criticism, started while in prison. In 2014, he was awarded an Honorary Doctorate of Humane Letters, Honoris Causa, by the Roosevelt University in Chicago, and the Doctorate of Public Service, Honoris Causa from Chatham University in Pittsburgh.