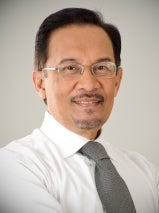 Dato Seri Anwar Ibrahim is currently a Member of Parliament in Malaysia and leader of the reform-oriented Opposition Coalition, Pakatan Rakyat. From August 2005-December 2006, he was the Malaysia Professor of Islam in Southeast Asia at the Alwaleed Bin Talal Center for Muslim-Christian Understanding at the Edmund A. Walsh School of Foreign Service at Georgetown University, where he lectured on contemporary politics in Southeast Asia focusing on the role of Islam in shaping the region’s political evolution. He remains involved in the Center’s activities and lectures on American campuses during his frequent visits to the United States.

Anwar Ibrahim was the Deputy Prime Minister of Malaysia from 1993-1998. He also served as Minister of Finance, Minister of Culture, Youth and Sports in 1983; Minister of Agriculture in 1984; and Minister of Education in 1986. He was also Chairman of the Development Committee of World Bank and International Monetary Fund in 1998 and president of UNESCO’s General Conference. As a student leader he was the founder of Malaysia’s Muslim Youth Movement and has extensive experience working with Muslim political parties.

He has lectured extensively around the world on governance and accountability, the relationship between Islam and democracy, the need for greater civilizational dialogue and contemporary politics in Malaysia and Southeast Asia. His articles and speeches on these subjects have been published widely in leading newspapers and journals around the world. He is respected internationally as a leader in interreligious dialogue and Muslim Christian relations and was one of the early signatories to the Common Word initiative. He has also held lecturing positions at the Johns Hopkins School of Advanced International Studies and St. Anthony’s College at Oxford University.