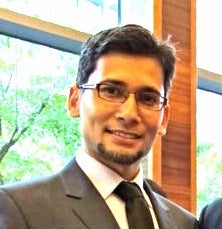 Dr. Khairudin Aljunied is a Senior Fellow at the Alwaleed Bin Talal Center for Muslim-Christian Understanding at the Edmund A. Walsh School of Foreign Service at Georgetown University, as well as an Associate Professor at the Faculty of Arts and Social Sciences, National University of Singapore (NUS). Dr. Aljunied completed his doctorate at the School of Oriental and African Studies, London in 2008.

He has studied and conducted research in countries such as Philippines, Indonesia, Malaysia, Australia, Netherlands and the United Kingdom.His book publications include Colonialism Violence and Muslims in Southeast Asia: The Maria Hertogh Controversy and its Aftermath (Routledge, 2009) and Radicals: Resistance and Protest in Colonial Malaya (Northern Illinois University Press, 2015) which Choice magazine describes as “an incredibly useful resource for scholars working on Southeast Asia, and Malaysia in particular.”

His most recent book, Muslim Cosmopolitanism: Southeast Asian Islam in Comparative Perspective (Edinburgh University Press, 2017), investigates the complex ways by which cosmopolitan ideals have been creatively employed and carefully adapted by Muslim individuals, societies and institutions in Southeast Asia. The book also explores how to bring about the necessary contexts for mutual tolerance and shared respect between and within different groups, particularly between religious groups in society. Dr. Aljunied has completed another monograph on the reformist thought of an Indonesian scholar, Hamka (Haji Abdul Malik bin Abdul Karim Amrullah. The book which will be published by Cornell University Press in fall 2018.