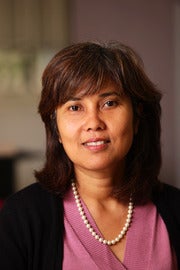 Lily Zubaidah Rahim is an Honorary Fellow and former (2019-2020) Associate Teaching Professor/Malaysia Chair of Islam in Southeast Asia for the Alwaleed Center for Muslim-Christian Understanding in the Edmund A. Walsh School of Foreign Service at Georgetown University. She was previously a professor of Government & International Relations at the University of Sydney and  a Professor of Global Studies at Monash University's Malaysia campus. She specializes in authoritarian governance, democratization, Southeast Asian Politics, political Islam and ethno- nationalism.

Her books include The Singapore Dilemma: The Political and Educational Marginality of the Malay Community (Oxford University Press 1998/2001; translated to Malay by the Malaysian National Institute for Translation), Singapore in the Malay World: Building and Breaching Regional Bridges (Routledge, 2009), Muslim Secular Democracy (Palgrave Macmillan, 2013), The Politics of Islamism: Diverging Visions and Trajectories (Palgrave Macmillan, 2018) and The Limits of Authoritarian Governance in Singapore’s Developmental State (Palgrave Macmillan, 2019). She is completing a sole-authored comparative book project on race supremacy and majoritarian resistance to multiracial democracy in Malaysia, Singapore, Australia and the United States.

Lily was Vice-President of the Australian Association for Islamic and Muslim Studies (AAIMS) and President of the Malaysia and Singapore Society of Australia (MASSA) – the peak academic association on Malaysia and Singapore Studies in Australia. She has served as a consultant to the Asia-Europe Foundation and was commissioned by the United Nations Research Institute for Social Development and the United Nations Human Rights Commission to report on the status of ethnic and indigenous minorities in Southeast Asia.