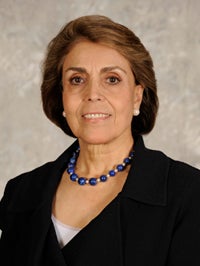 Dr. Shireen T. Hunter is an independent scholar with more than fifty years of experience in international affairs as a diplomat (Iran’s Foreign Service 1965-1979), a think tank analyst and program director at the Center for Strategic and International Studies (Washington, D.C.1983-2005) and the Center for European Policy Studies ( (Brussels) 1994-1997), and a university professor. From 2005 to 2007 she was a senior visiting fellow at the Alwaleed Center for Muslim-Christian Understanding of Georgetown University, from 2007 to 2014 a visiting professor, from 2014 to July 2019 a research professor, and was instated as an ACMCU Honorary Fellow in September of 2019.

She is the author of 16 books and monographs and editor/contributor of 12 books and monographs. Her latest books include: God On Our Side: Religion and International Affairs (Rowman & Littlefield, 2016), Iran Divided: The Historical Roots of Iranian Debates On identity, Culture and Governance (Rowman & Littlefield, 2014; Choice Outstanding Academic Title, 2015), Iran’s Foreign Policy in the Post-Soviet Era: Resisting the New International Order (Praeger, 2010), and Reformist Voices of Islam: Mediating Islam and Modernity (Routledge, 2008). She has written more than 100 book chapters and Journal articles and over 500 opinion pieces. She has lectured widely and participated in conferences in the United States, Europe, Russia, the Middle East and Central Asia and appeared frequently in US and other media.